“Angel on a throne” The pedestal is located near the Almaty hotel, where the musical film” Angel in a throne “was shot in 1968. The opening ceremony was attended by representatives of the creative intelligentsia: people’s artist of the USSR Bibigul Tulegenova, theater and film actors, people’s artists of the Kazakh SSR Yuri Pomerantsev and […]

To the state and political figure of Kazakhstan Hero of Socialist Labor Dinmukhamed Akhmedovich Kunaev (1912-1993), a monument-bust was erected in a park at the intersection of Bogenbai Batyr and Kunaev Streets in 1978. Bronze bust of D.A. Kunaeva, performed according to the model of the sculptor T.S. Dosmagambetov, was mounted on a pedestal of […] 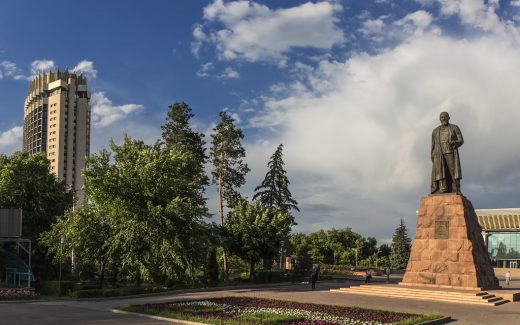 In 1960, a monument to Abai Kunanbayev was erected on Abai Square in Alma-Ata. The authors were the sculptor H.I. Nauryzbaev, and architect I.I. Belotserkovsky. The total height of the monument is 13 m. The sculpture is cast in bronze. The shape of the pedestal is trapezoidal, made of red granite. The figure of Abai […]

Bust monument to the thinker and writer Abu Nasr al-Farabi

Kurmangazy Sagyrbayev (1823–1896) Kurmangazy Sagyrbayev was born at the beginning of the XIX century, but stepped over the centuries, leaving behind truly immortal works. The conservatory, musical groups and palaces of culture, settlements, squares and streets bear his name. In Atyrau, a monument to Kurmangazy was opened on July 4, 2000, another appeared in the […]

Bauyrzhan Momyshuly (1910-1982) Bauyrzhan Momyshuly (1910-1982) was a Hero of the Soviet Union, retired colonel, participant in the Great Patriotic War. He fought in the 316th (8th Guards) Infantry Division under the command of I.V. Panfilov. Author of the works Our Family (Abay State Prize named, 1976), Tulegen Tokhtarov, General Panfilov (1963), Moscow Behind Us […]

Monument to the writer and playwright M.O. Auezov

Mukhtar Auezov (1897-1961) A monument to Mukhtar Omarkhanovich Auezov (1897-1961), a classic of Soviet Kazakh literature, Honored Scientist of Kazakhstan, laureate of the Lenin State Prize of the USSR, was erected in front of the building of the Kazakh Drama Theater named after M.O. Auezov in 1980. The bronze figure of M.O. Auezov was cast […] 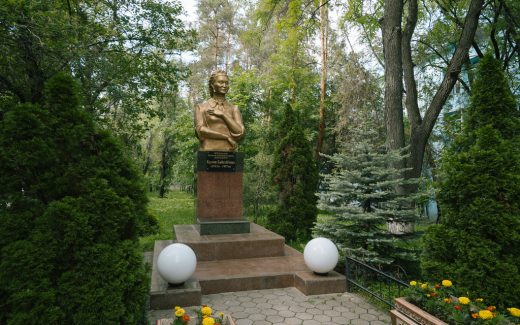 Kulyash Zhasynovna Bayseitova (1912-1957) Kulyash Zhasynovna Bayseitova (1912-1957) was a Soviet Kazakh opera singer (lyric-coloro soprano) and dramatic actress. Laureate of two Stalin Prizes of the second degree (1948, 1949). The youngest owner of the People’s Artist of the USSR title (1936) for all the years of its assignment. Baiseitova’s natural musical talent manifested itself […] 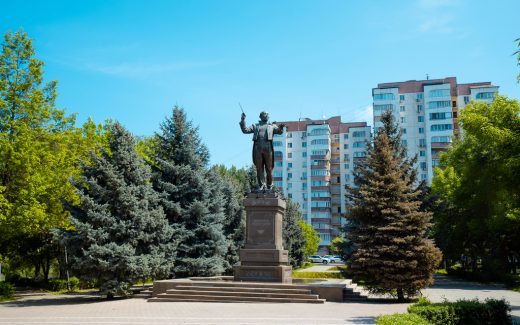 Nurgisa Atabayevich Tlendiev (1925-1998) was a Kazakh composer, conductor, dombrist, teacher. People’s Artist of the USSR (1984). People’s Hero of Kazakhstan (1998). Akhmet Zhubanov considered his first and main teacher: “Zhubanov taught me everything: to love and understand folk and classical music, taught me to work and find joy from creativity, taught me to love […]