Find out what to see and where to go?

Popular and most interesting sights of Almaty.

A heart-stealing place The lake of bewitching beauty is located among the picturesque mountains of the Tien Shan at an altitude of over 2500 meters at sea level. Scientists suggest that a beautiful body of water is the trail of an earthquake that struck the area thousands of years ago. Just 15 km from the […]

Precious stones among mountain valleys Among the snow-white mountain peaks, where the Zailiysky Alatau and Kungei-Alatau ridges join, in a small bridge of Kolsai gorge, there are hidden natural diamonds of the nature of picturesque Kazakhstan – Kolsai Lakes. Surrounded by majestic centuries-old fir trees, the three lakes shine in the light of the bright […]

The beauty of sunken trees The Kaindy lake of unearthly beauty is located among the mountain landscapes of the majestic gorges of the Kungei-Alatau, behind one of the winding turns of the road, 11 kilometers from the village of Saty. Located at an altitude of 1,667 meters above sea level, the lake isn’t of significant […]

The younger brother of the canyon in Colorado It is often compared to the American Grand Canyon, to which Charyn is only slightly inferior in size and not at all in beauty. The total length of the canyon is 154 kilometers, and its age is about 12 million years. The river of the same name […]

One of the best parks of the Republic The park is located in the valley of the Ili River and is considered one of the foremost parks of the republic, especially in the field of protection of natural wonders, flora and fauna, as well as in the organization of tourist activities and nature recreation. «Altyn […] 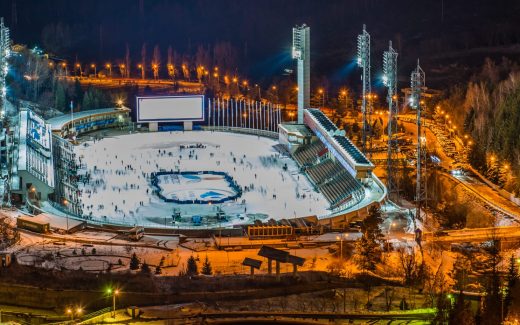 The most high-altitude skating rink in the world The “Medeo” complex is located on the border of the city of Almaty at an altitude of 1691 meters above sea level. Beautiful views of the tops of the Zailiysky Ala Tau mountains, clean air, soft sun – Almaty residents of all ages and occupations love to […]

The largest park of the city The territory of the park is 73 hectares of plantings. More than 11 thousand trees and shrubs, flowers and herbs are stunning in their diversity. Traditional oak alleys and an exotic “Japanese Garden”, flower beds and lawns where you can sit and have a picnic – the park has […]

The building “without a single nail” The absence of nails in the building is, of course, a legend, but many building technologies have actually been tested on it for the first time. For example, reinforced concrete structures, wood preservatives, and forced-air and exhaust ventilation systems. But the biggest innovation of that time was the construction […]

Beloved symbol of the city Kok Tobe Park is a popular place for romantic dates and family walks. It is located on the peak of the “Kok Tobe” mountain at an altitude of 1100 meters above sea level. From the city center, you can reach it in just 10 minutes by car, but it is […]

3200 meters above sea level “Shymbulak” ski resort is unique in its location – in just 1 hour, you can get from Almaty city center to its highest point and drink coffee in the highest bar in the CIS. Here you can find snow even in the 30-degree summer heat. In summer, the average air […] 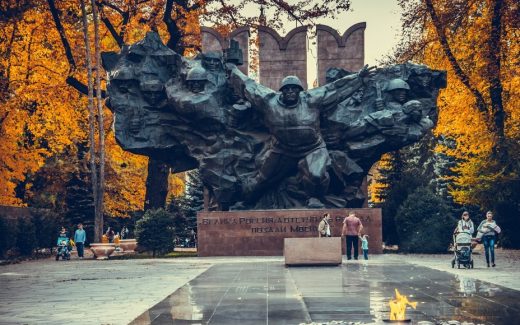 In memory of the fallen heroes The park is named after the Panfilov Division, 28 hero soldiers who single-handedly stopped the advance of fascist tanks on Moscow during the Second World War. The words of the permanent political instructor of the division Vasily Klochkov: “Russia is vast, but there is nowhere to retreat. Moscow is […] 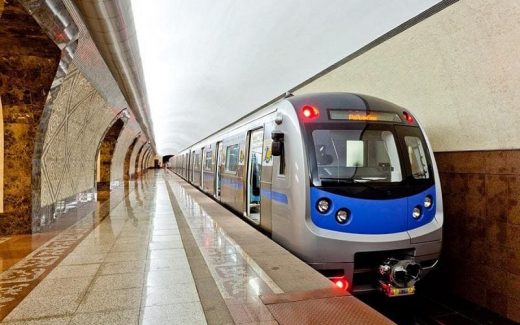 Almaty Metro Almaty Metro is an off-street high-speed rail transport system in Almaty.The first and only one in Kazakhstan, the second in Central Asia (after Tashkent) and the sixteenth and last (as of May 2019) on the territory of the former USSR. Opened December 1, 2011. On the first day, December 1, 2011, 11,000 passengers […]